From the enthusiast point of view, the line had a particular fascination, as it was a joint line, historically shared between the GWR and LMS.  Prior to nationalisation in 1948, all passenger trains were worked by GWR locos and men, whilst freight was worked by the LMS.  The LMS prohibited anything other than tank locos on the branch.  After nationalisation in 1948, these fixed rules were removed and both locos and coaches could be either GWR or LMS based with some passenger trains a mixture with one company's loco hauling the other company's stock. 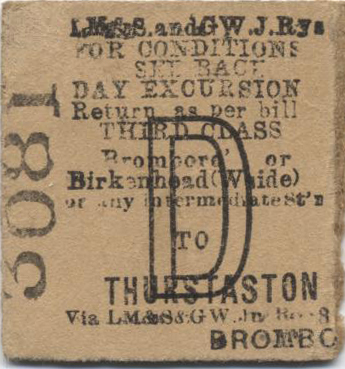 Passenger
In what seems excessive in these days of main-line trains as small as one or two car multiple units, the normal branch train was either three or more LMS or constituent non-corridor coaches, or a 4 coach GWR B-set.  In one photograph, an extra coach has been used to strengthen the B-set to 5 coaches.  The most common passenger locos in the later years were LMS Stanier 2-6-2 tanks and GWR 41XX Prairie tanks.

Even up to the very end of passenger services on the branch in September 1956, British Railways were promoting the line by offering afternoon excursion tickets from the main line stations Rock Ferry through to Hooton going on to Hadlow Road through to Parkgate on Wednesdays, Thursdays and Saturdays. Autotrains
All of the main railway companies developed some form of train for branch line service where the steam engine could be operated from a cab in a separate passenger coach at the other end of the train from the engine.  This saved the need for the engine to be uncoupled and run round the coaches at each end of the route.  These went under a number of terms, largely dependent on the earlier railway company, autotrain (GWR), motor train and push-pull (LMS).  The specific coaches developed by the GWR were referred to as autotrailers or autocoaches.

I understand that passenger autotrains were operated on the Hooton to West Kirby branch for two periods during the British Railways period. The earlier operation used ex GWR stock. When the engine was propelling, the driver would be in the autotrailer cab. From here, they could work the vacuum brake, sound a warning gong and through the use of rodding, the movement of the regulator handle in the autotrailer was transferred to the engine regulator by a combination of twisting, pushing and pulling. The fireman was required to stay on the engine and work the reverser in addition to the normal fireman’s duty.

The well known photograph by H. C. Casserley of West Kirby station shows the driving end of the autotrailer standing at the platform. The engine is behind the group of nuns and children on the platform. A second photograph of the engine being watered at the other end of the station shows that it is 1457. The coach is considered to be W212W, which is now running as steam rail motor 93 having been preserved and un-converted back to how it was originally built by the Great Western Society at Didcot. Birkenhead’s Mollington Street depot had an allocation of two 14XX 0-4-2T engines, 1417 and 1457 which were auto fitted for use with the autotrailer.

It appears that the autocoach was used for workmans trains, there being no First Class section. The summer 1952 working timetable shows the 7:16am weekdays departure from West Kirby to Woodside as the sole autotrain working of the day on the branch. From the 1951 Engine and Men's Workings, Turn 484 booked on at Mollington Street at 4:10 am to prepare this and another engine, leaving for Grange Lane carriage sidings at 5:40am. Here, they would couple up to the autotrailer, having to connect vacuum and auto gear, and be joined by the guard. Once ready, the ensemble would leave empty at 6:05am to West Kirby, arriving at 06:55am . The 7:16am was the second departure of the day, taking exactly an hour to reach Birkenhead Woodside. The train would then return to Grange Lane carriage sidings, deposit the coach and guard before returning the engine to Mollington Street at 09:00am. That was the entire shift for the engine crew, so it was hardly ‘sweating the assets’ in terms of the engine, coach or personnel. I doubt that ticket receipts would be sufficient to cover the direct costs of the operation but those were times when delivering a service was more important than its cost.  The loco and coach were used for a 5:01pm afternoon service from Rock Ferry to Hooton, then empty to Stanlow before working the 5:52pm Stanlow to Rock Ferry.

There are published photographs of 84000 at West Kirby on 13/09/1956, although it is not possible to confirm that this was a motor train operation. In the recent Middleton Press Chester to Birkenhead book, photos 114 and 115 show 84000 on a motor train at Helsby in 1959. The standard tanks remained at Birkenhead until 1961 working on local passenger and freight, including the motor train to Helsby.

The LMS method of operation used two additional vacuum pipes to pass the movement of the regulator in the driving trailer to the engine.  This was able to operate through more coaches than the GWR system, to a maximum of 4, and the West Kirby and Helsby trains shown have 3 coaches. Again, the fireman remained on the engine and communicated with the driver in the trailer driving cab by means of bell codes.

The LMS “Instructions respecting the working of Rail Motors and Motor Trains” from 1946 identify that LMS motor train operation was not allowed on any of the lines on the Wirral; however GWR motor trains were permitted between Birkenhead and Chester & Hooton and Ellesmere Port. Also, LNER motor trains were allowed between Bidston and Seacombe.

British Railways goods workings were mixed, typically using Jinties or Pannier tanks.  Due to the down gradient from Neston towards West Kirby, 1 in 73, some were double headed to provide the necessary braking power.

Latterly, larger engines were used, such as 84000 standard tanks and Black 5's, and a Fairburn tank and Hughes Crab are recorded working the final freight trains in each direction.

I have heard of Stanier 8F's and BR 9F's being used, but have yet to see photographic evidence, other than an 8F on a demolition train.

In the short period between the Cadbury's factory at Moreton opening and the line closing, empty vans from Cadbury's at Bourneville were worked to the factory over the branch. One of the photos shows what is believed to be one of these trains at West Kirby with a 4F. I understand that some of these were diesel hauled. The train of full vans was worked back to Bourneville via Bidston.

Miscellaneous
The electric trains that operated from Liverpool Central to Rock Ferry, West Kirby and New Brighton from 1938 were serviced at Birkenhead North depot. However, major overhauls required a journey to Horwich Works near Bolton and for this the EMU's were steam hauled from Birkenhead North through West Kirby and Hooton before reversing and continuing to Bolton. A number of old wagons had been converted to have a Buckeye coupling at one end to couple up to the EMU's which did not have the usual buffers and couplings at the end of the sets. To avoid gauging issues, the large steps for the passenger sliding doors were removed for travel.

The line was used for occasional movements of troop trains. These could be more like main line trains, an unpublished photo shows a Stanier 2-6-4T leaving West Kirby with at least 8 corridor coaches.

Possibly the most significant train in the line's history ran on the 11th of July 1957 when the Royal Train took the Queen to Grove Road station in Wallasey. The special working was hauled by a pair of Stanier 2-6-4T locos. By this date, the passenger service had finished, requiring maintenance to restore the track to passenger standards. Large crowds lined the route for the train's passing.

Towards the end of operation, when it was time for the West Kirby scout troop's summer camp, an empty ventilated van was placed in the siding at West Kirby station, opposite the signal box.  The scout hut was just outside the railway land so the scouts would need to go over the wall with their equipment and load the van.  A few days before they were due to leave, the van would be collected and transferred to the station nearest their camp, often somewhere in North Wales, so their equipment was waiting for them when they arrived.  The reverse happened at the end of the camp.

After closure
The passenger service on the line was steam worked to the end, however, after closure it was used for driver training on DMU's for service on other local lines.

The 2009 book on The Wirral Railway shows a special train to Chester for the local girls school leaving West Kirby behind 2 Fairburn 2-6-4T locos. What is especially interesting is that it is departing towards Hoylake but using the platform at West Kirby Joint station as the train was too long for the main station. Also, the date is April 26th 1963, so was over 6 months after the official closure of the track it was using, but still a year before it was taken up.
Go to Top